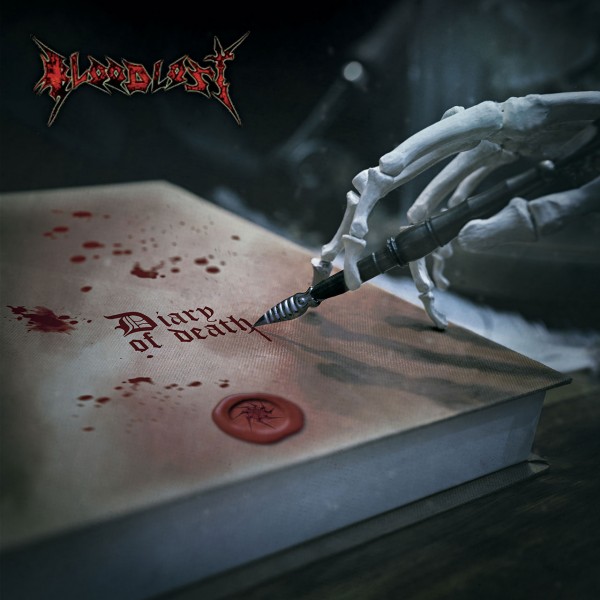 The swiss trio BLOODLOST was founded in 2005 in Sion, Valaia, standing and fighting for old-school Thrash Metal since then. Consisting of vocalist/guitarist Francisco Martins as well as the two brothers Lionel (bass) and Nico Fontannaz (drums), the band keeps fighting for their true mission, performing Thrash Metal in their very own way. After three studio albums, shows with a.o. NAPALM DEATH, DESTRUCTION and their recently played European tour alongside BEASTÖ BLANCÖ, the three-piece is now ready to unleash their fourth and new record „Diary Of Death“, out on July, 6th on El Puerto Records.
„Diary Of Death“ is a true old-school jewel, capturing the infernal live energy of this amazing and unique act. „For us the album is more violent, fast and loud. All of our expectations were realized, we think that we couldn’t do a better work“, comments the band. BLOODLOST took their time, and „kept only the best riffs and ideas to create that album“.
„Diary Of Death“ is quintessentially Thrash Metal without any doubt, inspired by the 80s classics of SLAYER, EXODUS and KREATOR as well as by underdogs like DEMOLITION HAMMER, SADUS and EXHORDER.
„Inspiration is given by our imagination of hell, war and destruction, religion and zombies as well as the daily brutality of mankind. All of this can be found on „Diary of Death“, our very own and personal diary.“
BLOODLOST are a part of the many, fantastic new and hopefull Thrash Metal acts, that came up within the past years. „For us in 2018, Thrash Metal isn’t dead and will keep on growing. Thrash is back with all its force“.
„Diary Of Death“ presents eleven new songs, recorded at the Full Metal Studios in Marseille by the end of last year. A true and timeless masterpiece, every Thrash maniac will love and bang is fuckin’ head to!