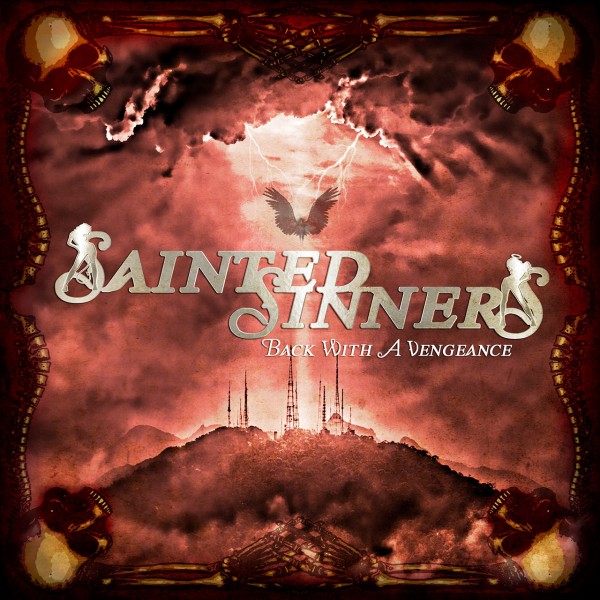 After the sensational self-titled debut of SAINTED SINNERS here comes their phenomenal sophomore album BACK WITH A VENGEANCE. All ten songs have been written and produced by FRANK PANÉ and DAVID REECE again and the result is absolutely convincing.
Already on the opening track „Rise Like A Phoenix,” the band proves their top-notch musicianship and shows the band in top form. Epic, impulsive, multilayer but nevertheless, ultra-catchy. This sensational album opening is followed by the first single track of the album “Burnin The Candle.” Classic hard rock at its best! Lead by the one-of-a-kind, blues- and soul driven voice of DAVID REECE (ex-ACCEPT) and the exceptionally gifted guitar work of FRANK PANÉ (BONFIRE). And exactly this guitar work of FRANK PANÉ, besides the unique voice of DAVID REECE, can almost be described as supernatural. Example helpful? Just listen to the title track „Back With A Vengeance,” and you’ll know why you simply have to love this band. The album goes on with a proper share of blues rock and a DAVID REECE in top form with “Tell Me I Was Wrong,“ before the band creates an intense, atmospheric, epic, spherical, oriental monster of a track with „Nothin Left To Lose“.
All the remaining tracks of the album, from the drifty hard rocker „Waitin Til The Countdown Begins,” over „Let It Go,” provided with great vocal lines and harmonies, the riff-rocker „When The Hammer Falls;” or the clandestine hit of the album, the bluesy, starting with a great guitar-riff „Pretty Litle Lies“, including its gorgeous Hammond sounds, up to the wonderful and dignified ending track of the album „Gone But Not Forgotten“ – everything on the album is just perfect!
Expressing the “pure essence of rock’n’roll”, was the ambition that paired those four well-known and experienced musicians together. The love for music, for rock legends such as DEEP PURPLE, LED ZEPPELIN, RAINBOW, WHITESNAKE, UFO, BLACK SABBATH, VAN HALEN and many others, built the cornerstone for the music of SAINTED SINNERS. And this is what the band stands for – stronger than ever. Classic Hardrock with balls, but also with heart and soul, a lot of energy and emotions … and – bottom line – brilliant songs!